The incidence of breast cancer is increasing. According to the national cancer registry programme of Indian Council of Medical Research, the estimated number of new patients with breast cancer is likely to go up from 1 lakh in the year 2010 to 1.23 lakh by 2020. The magnitude of the disease is huge yet it is such a treatable condition.

In addition to the fear of the word cancer, breast cancer also raises the issue of body image and feminity in a woman.

Although the incidence of breast cancer is on a rise, women surviving from breast cancer are also increasing. There are newer and better modalities of treatment available which have increased the survival rate in women with breast cancer.

There is often a myth in women that breast cancer is equal to breast removal. But this is not true. Far advanced surgical techniques are now available. The current trend emphasises on organ preservation. We can now focus, not only on com-plete clearance of cancer in the body, but also on retaining the feminity of the woman.

This type of a surgery can now be offered to most women. There have been many studies which have shown that breast conservation surgery followed by radiation therapy is as ef-fective and safe as complete removal of the breast.

This kind of surgery has always to be followed by radia-tion therapy. For some reason if the patient is unable to take radiation therapy post surgery, this technique cannot be offered to them.

This technique is most suited when the tumour at the time of diagnosis is small in size.

But even for some reason if a woman has to undergo mas-tectomy (complete removal of the breast), reconstruction surgeries can be offered.

Reconstruction surgery creates an artificial breast. This is a procedure that allows for the immediate rebuilding of the breast of the patient. A new breast mound is created which is of similar size and shape as the original breast. After such surgery it is difficult for other people to realize that the patient has undergone removal of her breast for cancer treatment. Such reconstruction surgery can be either Implant-based or autologous fusing patients own tissue).

All the surgeries are time tested and very safe.

Women need to look beyond the diagnosis and treatment of cancer. They should look forward to getting cured and to leading a full life as cancer survivors. We can now focus, not only on complete clearance of cancer in the body ,but also on retaining the feminity of woman.

Mrs Kamaldeep Peter, a 53-year-old post menopausal lady was referred to us with complaints of lump in the left breast for an year. She has two children who were breast-fed for two years. There was no significant family history. She has no other medical problems.

Mammogram and core biopsy confirmed the diagnosis of cancer of the left breast.

PET-CT scan (whole body scan) did not show evidence of disease having spread to the distant organs. The disease was confined to left breast and the lymph nodes in the left armpit.

She underwent breast conservation surgery. Subse-quently, she was given eight cycles of chemotherapy. This was followed by radiation therapy with TrueBeam STx, using an advanced technique called Respiratory gating.

She has been coming for regular follow up. Her follow up PET-CT scan shows that there is no evidence of the disease in her body at this point of time.

She is leading a normal life and her disease is in complete remission. 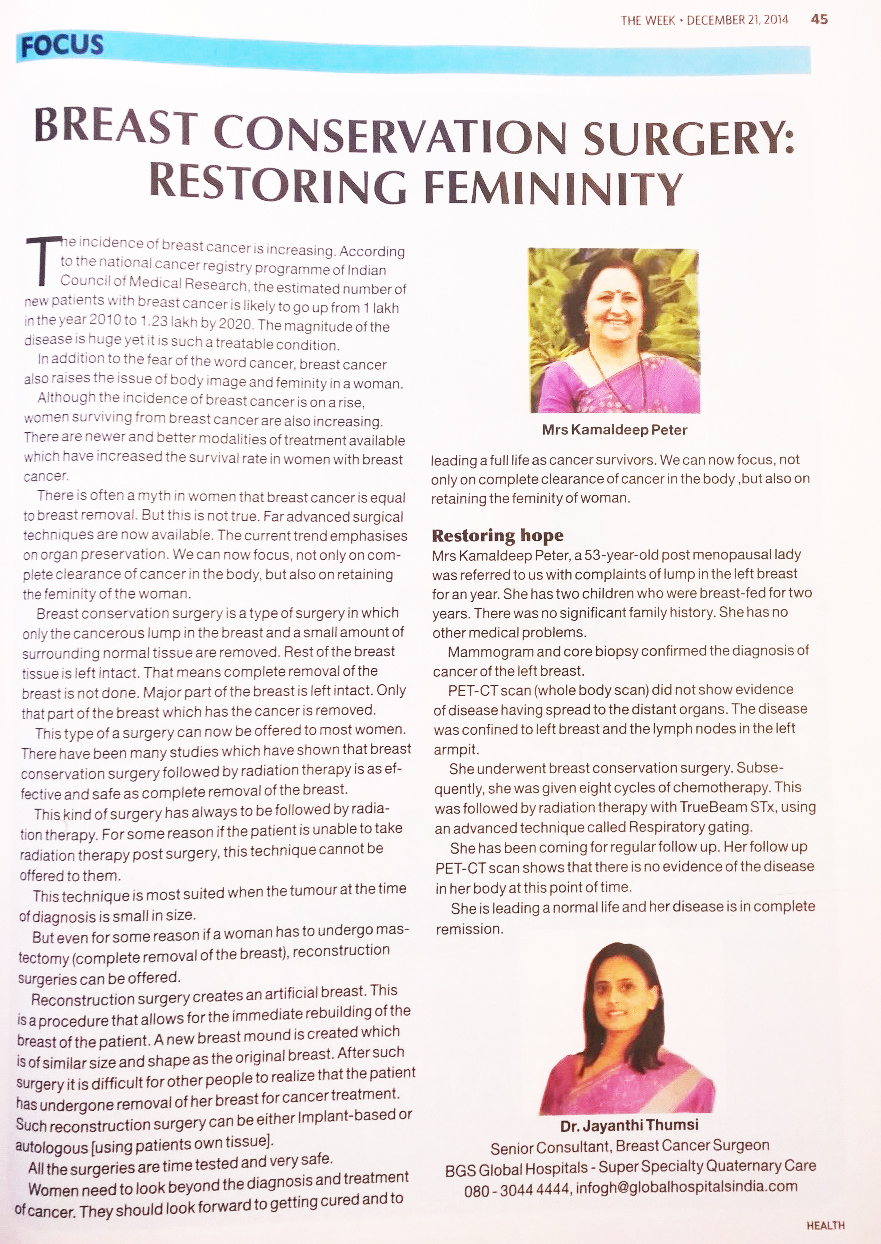